I have been using Azure Table Storage—ATS in a couple of my personal projects, and I just love it. It is simple, the performance was decent and the storage quite cheap. A NoSQL key-value store like ATS is just perfect for storing lots of unrelated records like audit, and error. In our case, around 70% of our data fall into this category.

I had the perception that ATS was not that fast, but I did not notice much impact on the performance of the site. Anyway, the audit and error reporting operation were asynchronous. Probably the only major drawback during the project was the ATS poor API – I still cannot conceive the anemic LINQ support.

During the architecture definition of a new web-based project I started to consider some other options for the data storage. This new project required a data model with way more relations between entities – a productive API was key, although I wanted to stick to a NoSQL store for future-proof scalability.

One of the serious options that we started to contemplate was MongoDB. I had some quick experiences in the past with it but nothing serious. I knew that their support of LINQ was phenomenal, the option of growing to a massive scale thanks to sharding and replica sets, but what about performance…? How would ATS performance for read/write operations compare against MongoDB, or Azure SQL?

I built a simple MVC 5 application and deployed it in a Azure Web Role (XS). Using the ATS .NET Storage Client Library 2.2, I built a simple page which reads 100 records in a ATS table, and another page for reading each one of the records in that same ATS table. The average latency of each write and read operation is displayed. I based my application on the tutorials and walkthroughs available  from Microsoft. The idea was to build it with the techniques available, without any tuning.

I did the same thing with Azure SQL, procuring the smallest database I could. I used plain old fast ADO.NET DataReaders for implementing the operations.

For MongoDB, I launched a Extra Small VM with Linux CentOS. This is a 1Ghz CPU, and 786 MB RAM VM.  MongoDB was deployed with default settings.

Naturally, all these resources were located in the same region (US West). This diagram summarizes the topology: 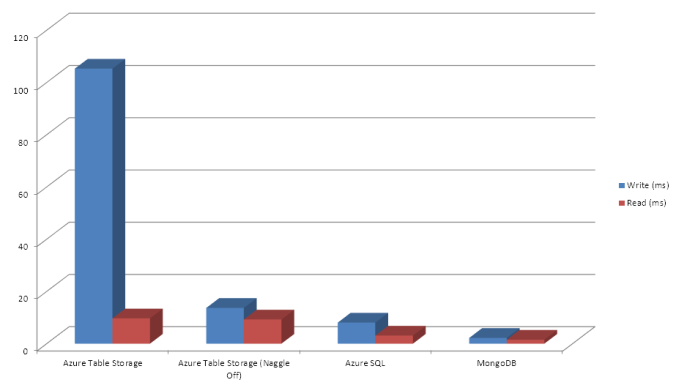 Yes, the performance of plain vanilla ATS is just disappointing. After some research I found blog post with similar findings, which indicated how to improve the performance turning-off the nagle before the calls:

The performance benefit is impressive – I wonder why this is not a default setting. Note how the read operation were not affected by that.

The performance of Azure SQL operations was really good (under 10 msecs on average), but the winner as you can see was MongoDB – impressive, with both operations under 2 msecs!

Well, that was a eye-opener. It is pretty obvious what we are going to use for next projects. Unfortunately, neither Azure nor Amazon Web Services offer a managed MongoDB service at this time, so I would need to setup and maintain my own set of VMs running MongoDB, which is not a big deal, but I would need to pay for this in addition to the storage.

Cheers, see you next time amigos.